Finally, Someone Important is on the Boat

Ok so, my reading of the NYT daily....well, that's not exactly possible. Unless you have countless hours in your day and take no naps, and have unlimited amounts of time to just sit there and learn things, then maybe, just maybe do you have time to actually finish reading the New York Times.

Usually, on a good day I will read 85% of international news and 95% of National news. But reading it every day has grown to become a very unlikely goal. But I am trying, very hard. I have also picked up the enjoyable habit of reading "The New Yorker" which I find to be very easy to read but also very interesting.

Cool moment of the week:
My professor that I have that I mentioned previously that inspired me to read the NYT- well she was lecturing about environmental health and mentioned a key piece of information and quoted WORDFORWORD articles of information that she could only have learned from a particular article in the NYT that i specifically remember reading a couple of days ago. I had the *OVERWHELMING* urge to act like Hermione and raise my hand and be like, "I KNOW WHAT YOU ARE TALKING ABOUT!! YAY!!!" or, "I READ THAT ARTICLE TOO!! LETS TALK ABOUT IT AFTER  CLASS!!!'. 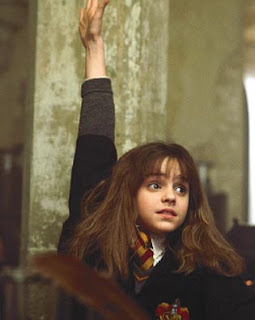 But I didn't. Because really, where would that get me? As much as I want my teacher to know she inspired me to be smart, I can't just raise my hand and tell her that I'm smart now. It doesn't work like that. And plus, no one likes Hermione when she acts like that.

Anyway, lets get to the real purpose of this blog. Oh my god, on a side note, I have so much so say that has happened since Tuesday. Maybe I'll make a separate blog all about that. Do you want to read about that or do you not really care? I think you care. Don't lie.

Anyway, lets really get to the purpose. Upon stumbling upon (bad wording-sorry) the National news in NYT on February 7, a certain article instantly caught my attention and I love when that happens! It was titled "Restaurant Nutrition Draws Focus of First Lady- Expanding the Push for Healthier Eating."

Can we all take a moment of silence to jump up and down and say YAYY!??

Ok! Good! This is FABULOUS! I was not aware that Michelle Obama was involved in all these nutrition campaigns. If I were ever a First Lady, this would definitely be the kinds of great things I would do. This is how we are going to reach the people. She has so much power, she is the person to do it. I am so glad she is making the move to do so.


"A team of advisers to Mrs. Obama has been holding private talks over the past year with the National Restaurant Association, a trade group, in a bid to get restaurants to adopt her goals of smaller portions and childrens meals that include healthy offerings like carrots, apple slices and milk instead of French Fries and Soda."

Obama, (M), Also has magnificent plans to lower prices at Walmart for fruits and veggies and to reduce the amount of fat, sugar and salt in all Walmart products. This is also fantastic. Sad as it is, but through Walmart is how to reach a large percentage Americans in this economy. If I had to make up a percentage I would say 60%. That is a lot. Walmart is cheaper and even the middle class is sensibly choosing Walmart over higher retailers, especially with the multitude of Super walmarts and their ability to carry groceries. Have you ever noticed that the chips and unhealthy foods are always cheaper than the fruits? A bag of cheetos is cheaper than a carton of strawberries. You can see how its easier for families to choose the cheetos. If Mrs. Obama can effectively lower prices on the right items, we can help families choose healthier foods...even if just the the cheaper cost.

ALso on Mrs. Obama's agenda:
So, all good things.

Now, for my feelings on the restaurant nation:

...Where to even start? First of all, I love to eat out, as do many, many other people. It is a good social thing, when your town has nothing to do (like mine) other than eat out all the time or go to the movies. It tastes Yummy. Its nice to see other people that live in your town. Its nice to eat food that you didn't have to make or clean up. It's nice to be waited on.

But is it nice to feel guilty and fatter the next day? What if you knew exactly how many calories you consumed during that meal, or grams of fat? I can definitely say that going out to eat a lot has put on the pounds.

If we as a country, if Mrs Obama, can figure out how to make restaurants healthy, it has to happen all at once. All restaurants have to do it together or they will all fail. If one chain restaurant "goes healthy" the people will notice a change in food, perhaps, and will shun that restaurant (A) and go to another one (B).  A will take the financial cut pretty hard and B will love all the extra customers, and see no good reason to "go healthy". Soon enough, restaurant A will have to return to its "good" food if it wants to survive. But if restaurants did this change together, if it was mandated by law (which is impossible because this country cant agree on anything in congress), then all restaurants would be equal in the healthy eating boat.

If all restaurants fail, or restaurants overall notice a decrease in business, then we still succeeded. People will have to eat at home and therefore, most likely a little healthier. At least, if anything, they will know what is in their food.  Now by restaurant, I mean chain big restaurants, that you sit in and they bring you food after ordering. Don't even get me started on Fast food. I don't even know what to do about fast foods....But I do know that if we regulate laws on standards of cooking foods in restaurants, we surely have to either wipe out the fast food kings or get them to adapt these new laws as well.

If I ran the country and was involved in this campaign, I would fight to make soda illegal in restaurants.

I know, I know. Hence why this is unrealistic. Just because I believe soda is a BIG factor in this country's obesity and I haven't had a soda in over 5-6 years, doesn't mean everyone else is going to agree with me. But think about it. In restaurants, you drink socially...you get refills, you may even drink 2-3 glasses of soda. And diet soda? Worthless. Its still atrocious. If we could get rid of soda in restaurants, think of how much it would help kids, help combat diabetes, and obesity. With the rate of how much people eat out, we could target a big population with this change. And its not like you would be stuck drinking water...you could still have ice tea combinations available (still high in sugar, but better), hot tea's, juice's (for kids)...and, the almighty...water. And Water is free, too. Big incentive. OH! That just dawned on me. What if Ice tea were made free? And soda made more expensive? Is that more of a hassle than making soda illegal in restaurants? THink about it..

I just wish people could be healthier. In my mind there are three groups of people:
IF we could target that third group....educate America and help those people that want to eat healthy but don't have an education or were never taught how to eat healthy, then this is how we can reach them. By making changes in their lifestyle. By lowering fruit/veggie prices at Walmart, but abolishing soda in restaurants...by taking less saturated fat out of restaurant food...

On a side note- My dining hall at school has been trying recently to put nutrition labels on foods throughout the hall. Well, in my mind, I am even more turned off...For looking at the label for a muffin which I would have guess to be healthy since it was the "Balanced Way- Healthy" muffin of the day, it still had 8 g of Saturated Fat in it...so, needless to say, no more muffins. I think i would have been better off not knowing. How can they call it healthy when it still has that much crap in it?

So thats the end of my ranting....I promise. Sorry for the unnecessary amounts of food ranting.  I hope you found it interesting and maybe helpful.

Do you want to see a separate blog on an update on my life? If you have read this far, you get a major vote. so vote. Because I can write a whole other blog, on many other things that are not so boring. But you let me know. ;)

With Immense Amounts of Love,

Haha I love your signature today. What events have happened?? I'm curious!
Also I think I'm usually in that second group =/ though in general I've been eating A LOT better than I used to.