This past week, spent on Long Beach Island, a Jersey Shore beach- I was standing at the waterfront, alone, watching the ocean, like any other trip to the beach.  I always like to see how long I can stand there and how far deep the sand can sink me as the waves recede and conquer my small legs. As I got bored of looking at the ocean, I noticed something peculiar about the sand below me. There was virtually no seashells....by that I mean there was a missing plethora of big seashells, usually there are thousands and thousands of washed up seashells of all different colors, sizes and shapes.

Instead, there was something new, something I've never seen before. At first I thought they were all "baby seashells" (I never got a degree in biology, OK?) Because thats really what they looked like. Miniature seashells, millions of them. They washed in and out, up and down with the shore waves.

As I observed them closer, I realized they weren't just seashells. They were moving. In fact, they were making a conscious effort to burrow themselves in the sand. My first thought process was that they weren't moving--It was the sand enveloping them just as it sinks my feet. But I still thought it was unique how pretty these miniature creatures were and that I had never seen them. I bent down to get a closer look at them, and realized that when the wave receded, they were all sticking out some sort of gooey white "tongue". Me having the curiosity of a five year old, I have to touch everything. So, despite the fact that I am terrified of the ocean because of strange creatures below me, I deemed this creature no longer unfamiliar and we were now friends, and it was OK and not-terrifying to touch it. So, I touched it.

As soon as you touch one, they sense this and, like a turtle almost, curl their tongue-y thing quickly back into their shells. Now, this was curious!

So before I further continued to discover more about them, I had a lot of fun touching as many as I could and making them hide in their shells. In hindsight this sounds mean, but it totally wasn't. I don't think. OK maybe it was. But it seemed all in good fun at the time. And you know, learning. Learrrnnnnninnggggg.


Anyway, I continued on my learning journey. When a new wave came in and brought an entire fresh new batch, I put my hand in the sand to barricade a couple from returning back to sea, and picked a whole batch up in my hand. I felt it curious that I could actually feel them burrowing into the sand that was in my hand! How fascinating! But due to my eebyjeebyness I put them down soon enough because honestly I don't fancy things moving in my hand. But it was cool.

So that was day one. But I still didn't know what they were. I got home that day and googled such things as,


Clearly, I wasn't getting anywhere, and It was time to run off to the nightly activities, so I gave up on my research quest.

I spent most of the rest of the week picking them up and putting them back down and learning as much about them visually as I could, until I could no longer  stand it. I had to know what they were. I felt as if I was discovering a whole new species. I could be like.....a species-discoverer. They have jobs for that, you know.

So thanks to the awesomeness of Facebook, i was able to video record these guys and post it on facebook, and my handy biology friend was able to identify, and teach me a lot about, these little guys instantly! The Coquina Clam!

So here's what they are all about:

Here was my video:


*Okay video is NOT working* But I am working on it. In the meantime, here are some pictures: 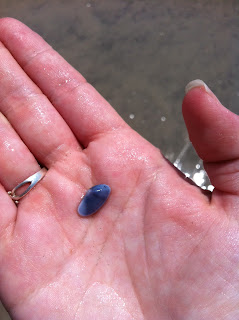 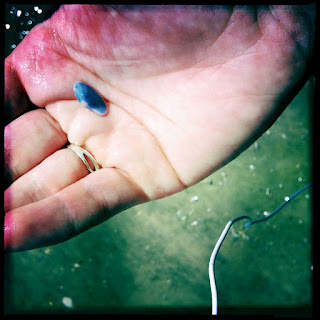 But then as the days in the week went by, the more I spent with them on my mile long walks on the beach just watching these adorable guys instead of the hot surfers, I realized the whole species was making me sad.

Here was millions and millions and millions  of these little clams...trying so hard to survive. They burrow themselves in the sand like that in a desperate attempt, at each wave just to survive. At each wave, they work so hard to hide themselves from seagulls and other predators. They have to do this for their entire life. Eat plankton and hide from seagulls. And here was the human race, running, surfing, walking, boogie boarding on top of them without even noticing how hard they are just trying to survive. Small children I

But really...it truly is fascinating how complex and diverse this planet is. Here is this miniature oceanic creature, working in and day out to survive, to eat and be eaten, every day, and then there is the human race....kind of symbolically doing the same thing, right? What are we really here for anyway, when you think about it? We eat, work, sleep for 100 years and then we die. We hide. We try everyday to survive. Our heart pumps 60-90 beats per minute every day to help us survive, just as this clam works to survive at every wave. What is it all for?


Sorry I went all philosophically crazy....I guess sitting on the beach in the waves for a week staring at the water does that to you, perhaps? Its great reflection time. I really enjoyed discovering this new species and learning so much about them. They were fun to hold and then release. Oh, what an interesting planet we inhabit.....there is so, so, so, so, SO MUCH, more out there  on this very planet than the human race, and I hate that humans forget this, sometimes. Sometimes we go all egocentric and think the world is all about us, and the world revolves around us and for us and we forget that our problems are insignificant, really. We are merely just one of a billion species sharing this earth, together. I am certainly no tree hugger activist or "save all the animals" type girl, but I am the type of person that wishes they could just SAY to some selfish egocentric people that the world is not all about them.  There is so much more, if you just open your eyes and stop talking and just.........observe.