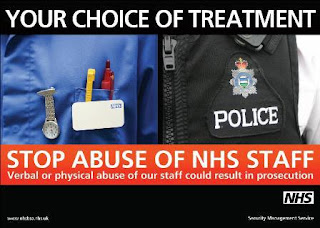 Just saw these posted on Nurse's Rock   and it really makes me wish I was a nurse in New York! HA! Although part of me still thinks that even though its "the law", those nurses probably still get beat up. But its nice to at least have it be.....the law.

Now, luckily, I am small. I'm 5'2" and 145lbs, so I can move pretty quickly usually. I am also very aware of my surroundings at all times, and have a somewhat extra sense of being able to predict people's actions by the way they are radiating emotions. That being said, (knock on wood!) I have not been "assaulted" in the past 6 years.

So who says nursing isn't dangerous? Anyone that thinks nursing is for sissy little girls can go kick my A$$, thank you very much!