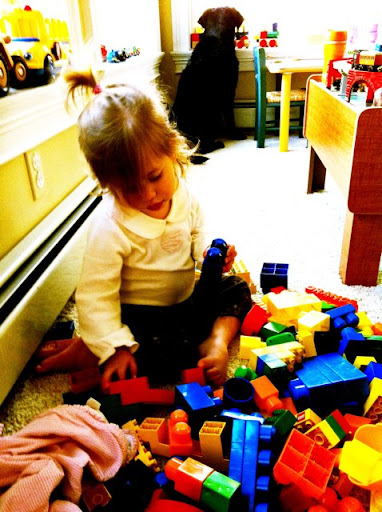 I wonder when kids play with Legos or blocks, if they have a particular idea in mind? Or if they are just putting pieces together and imagining what it is they have now put together? Or if they are just put random pieces together just to see if they fit? Who knows. Maybe each kid is different. Maybe they are doing all of the above. I think they are creating as they go, because kids are strongest in imagining. I think for kids, one object can morph into many as long as they use it differently. Ryan, the kid I babysit (he is 3) made a tower of blocks, a single line of small blocks that went straight up. Id put in a picture, but my phone only let's me put in one pic per blog. Anyway, I consider myself to have a strong imagination. However this is a list of the things I would think this line of blocks to be, ( the mind of a 22 year old):
- a tower
- a building?
- a snake maybe, if you lay it on it's side?
- a tunnel?

Then I interviewed Ryan who was building next to me. What is that?
- first, word for word, it was a "master inside" ( I'm still working on figuring out what he meant)
- next he put it on my head and it was a funnel for my brain, lol.
-next he added a piece and then it was a dragon in an airplane!

The imagination kids live off of just fascinates me. They have nothing else- no clouded mind of an adult. They aren't clouded by concrete thoughts that bother adults- that a line of blocks can't be a dragon in an airplane. We think logically because that's what we know and that's how we are comforted.

Sit down and with Legos and make something. Anything. Do you find yourself creating something you have in mind? Or creating as you go? The first time I sat down with the kids to build, I wanted to build an airplane and I found myself frustrated because it didn't really look like an airplane. But today when I started to build, after many many times of building the last couple months, I noticed something different. I just started putting pieces together and hoped for the best. I loved it. So much less stressful.

I think we could all use this as an analogy in life as we go about our day. Maybe it's not so important to go about a task with a specific idea in mind, but more important to keep an open mind and to put pieces together. Let your subconscious create and watch what happens. Let go and try it sometime...

I would love to interview many different types of people as to what a simple Lego creation could be. I would ask a toddler or two, an elementary school student, middle school, high school, college, adult (single), adult (married), adult (with children- young), an elderly person and lastly, an elderly person suffering from dementia. I think that would be an interesting response. I would love to create this study. It would be a lot of fun. :-)

That's interesting. Sometimes I try to remember what it was like playing with legos, but like many of us old farts, I can't remember the thoughts I had while playing. Probably because there really weren't any. Whenever I ask Jamie what she's thinking, she usually says "nothing" and I tend to believe her. There probably really is nothing. Why do you think kids "don't listenn" meaning they don't do what you repeatedly tell them every single day? Because they don't think. Whenever I am mad and yelling at aJamie, I'ma ll like "Don't you even THINK about things while you are doing them?" But no, probably not. And I usually end up calming down when I think about that, because she really is just a kid, and that doesn't excuse her bad behaviour but maybe it's not bad at all, maybe I am just so conditioned into being an adult that I no longer appreciate the actions of simplicity. I always sit back and think, what am I mad at her for? Richard just cleaned every wall in the house from crayon and marker for our inspection... and then moments later we go into the kitchen and Jamie had written "Jamie loves Alex" on the wall with two smiley faces representing her and her sister. Richard was really mad, understandably, but I just looked at it thinking "what was going through her mind after we told her we were cleaning the walls and no more crayon drawings on walls?" I realized she saw a pink crayon, saw her sister, loved her so much she wanted to express it. Sometimes I think Jamie is an artist, or at least right brained, because she honest to god means no harm, ever, she just does what feels right.

I even like when she argues back with me, when I'm yelling at her, she puts me in my place and reminds me I am just stressed. I allow her to talk back, and I know a lot of moms (and Richard) disapprove but in Jamie's case I think it's part of her development. She always says legit things. Like "I wasn't trying to make you mad! I was running because I had to pee!" and now I try to only punish her when she has bad intentions, or when he accidentally hurts someone. But I still have a long way to go, but this fits in to your blog because I try so hard to base my parenting off of the children I have individually, instead of what parents normally do, because I believe every child should be treated according to who they are, you know? I let Jamie slide on so much because of her way of thinking.

I agree with you 100%. First of all, I think Jamie is brilliant, based off of the few times I have met her and reading what you write about her over the years on MS or FB. I also agree with your parenting ways and plan to run things very similarly. Kids astonish me every day on how smart they are. Do they think? I don't know. How do they think? I don't know. I am very curious. I wish we could get into a child's mind or perspective and watch their stream of consciousness...how they arrive at conclusions, why they decide to do things. I have always believed that every one has a story, a motive. Bad behavior had reasoning behind it, an emotional incentive most likely. Like you, One day when I have children, and they do something bad, I want to be the parent that sits down with them and talks about what they did and why they thought to do that. See where their mind is...Hopefully it gets me somewhere.