So even though it is only one day after picture of the week, I took these on my phone after I posted picture of the week (I guess next time I'll post at night!), and these were just so pretty that I had to put them up today. Enjoy :) 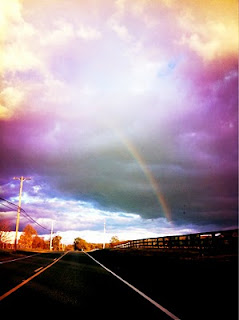 Last evening it was drizzling and the sun was still shining bright- so I took a photo of it in our backyard, and it was pretty, and I moved on. I was late to go pick a friend up, so I hit the road. But THEN, I turned on to my main road and found THIS. So I pulled over and quickly took it. Quickly. It was nice to begin with and then I edited it some-more contrast, exposure, rainbow surrounding the picture...pretty. But that rainbow was pretty epic. Now where's the treasure?? 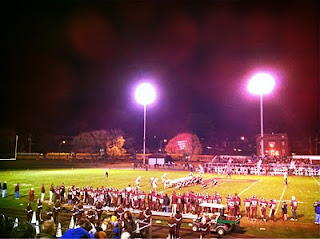 This was taken last night- probably my last pburg home football game. Not only do I plan to not be in Jersey next year, but my sister will be done dancing on the sidelines, so, I really have no reason to go anymore. So, this was my reminiscent photo for the night. :-)
~A Writer (and photographer) in a Nurse's Body <3>