In Case Nursing Doesn't Work Out

I just killed three stinkbugs in my house with a vacuum.

You should have seen me go. It was epic.

It all started when I *heard* one in my room ( I HATE THE SOUND THEY MAKE).

Now let me have you know that I am the type of person that will usually injure herself in efforts to get away from a stinkbug. I will run/duck/hide faster than you can even say stinkbug. However, I usually send in one of my valiant parents to save the day (despite me being 22). Tonight however, no parents. No anyone. Just. Me. And. Stinkbug.

So I did what any logical 22 year old would do. The bug was blocking my exit from my room, so I had to hide. Underneath my blankets. Let me illustrate: 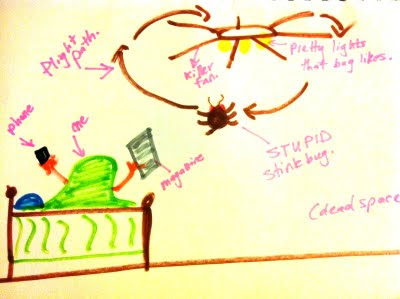 I grabbed a magazine to help swat at it if it tried to break my blanket defenses. I also, in reflex of course, grabbed my phone so I could text outsiders to come help. I desperately texted my (valiant) father, asking his ETA to home. Response? 20 minutes. That was TOO LONG.

Meanwhile, I REALLY needed a shower. So I peeked out from underneath my blanket and watched the stinkbug fly in circles around my fan and the pretty lights so much so that I was convinced this was all a ploy of his to get my hypnotized, or something equally crazy. THEN, the fan SWAT him because I turned it on high speed and these stink bugs are just so stupid and KEEP FLYING INTO THE FAN. So, It was dead. So I thought......

So It was safe to take a perfectly stinkbug-free shower. I get my towel and walk into the hallway. THEN, I HEAR ANOTHER F*&$*#( STINKBUG. So I jumped and yelped and did the boogy dance (to shake off any stinkbug that landed on me, of course). And I ran into my parents room for safety.  THEN, ANOTHER STINKBUG APPROACHED! ITS LIKE A CONSPIRACY!  Or, It was the same bug, following me. Two equally scary possibilities. So I realized I had to stand up to them, with language. . . 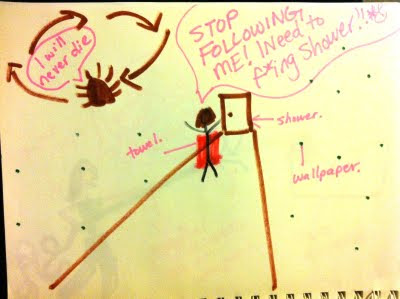 After I was done screaming at it, I closed my parents door to trap it inside. As for the hallway one, it was no where to be found. After that I ran valiantly into the shower, checked the whole bathroom for stinkbugs and proceeded to take a very nice shower.

I get back into my room and get dressed. As I'm brushing my hair, (thinking the first stinkbug died in his stupid attempt to continuously hit the stupid fan), WHAT DO I SEE BUT THE DAMN (INJURED) stinkbug on my TAPE DISPENSER.

Thats when scared pathetic me realized It was really time for this to end. I ran (valiantly) into my sisters room where the house vacuum was, and brought it to my room. Plugged it in, and went at it.... 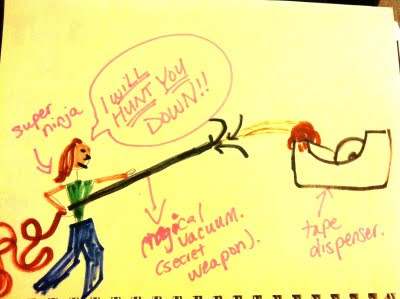 Since that was such a success, I decided to venture out, weapon in hand. I FOUND the hallway one. Got it. Success #2. TIme to open my parents bedroom door. I went in, weapon ready. Looked (valiantly and carefully) for the stupid bug, and FOUND IT on my moms shirt (ew). I thrust my vacuum secret weapon at it and it FLEW AWAY. So I retreated back to the door, and went back in when I heard its stupid wings land again. Stupid thing went back to the same shirt. This time, I was not going to fail. I so got that sucker. 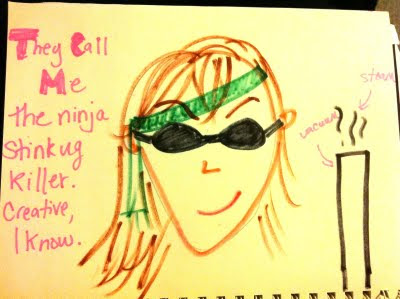 Then my dad finally, came home. 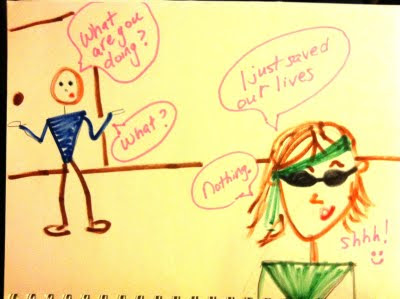 This actually made me laugh out loud. If you don't make it as a nurse, an artist could always be the next career move ;)

Hahah thank you Luke!!!! Every epic story needs artistic illustration! I just try and pretend to be good at it. Thank you so much for reading! How is it over there across the world? I'll be there in one month!!! So excited.

Oh it's wonderful. The Royal Wedding was amazing, I think people have generally been in a really great mood because of it. Weather has been beautiful until the last few days. Besides that, nothing of note! I'm sure you'll love your time over here :D