Its a Different World!

Hello! I have found a small nook of time to blog a little before we leave for our bikeride along the Dutch countryside! I have one hour so I will blog as much as I can and then pick up where I left off!

It gets dark here at like....10:30. That is so wild. At 9 pm, I swear it looks like the American version of 2 or 3 pm. So weird. It really isn't helping my body get used to adjusting to jet lag! Jet lag is funny because no matter how much sleep I get I'm still tired, I keep waking up at 3 am feeling awake, and my stomach is constantly hungry!! (which is not good, because food is not exactly plentiful!) Well, it IS plentiful, but my wallet is not!

Our hotel is lovely! It is on the wee outskirts of Amsterdam in a residential neighborhood, about a 15 minute walk to the tram station and then about 30 minutes on the tram. As I'm writing this I can hear neighborhood kids playing outside- running around playing baseball and kickball (they probably call it something different).

I have the bestest, most sweetest roommates in the world! For Amsterdam at least, we are probably going to have to switch next city to meet other people.

I am 90% sure that my group is the only 30 people in the hotel that speak fluent english- everyone else is Dutch. Which I KEEP FORGETTING, because other than that--you would think this is an "american" hotel. So I get on the elevator and I say "Good morning" and they don't respond. Or I mutter off something quickly that any fluent english person would understand but not someone that does not know it well. Or, days like today, I said "Good morning" in Dutch! Woot! and must have pulled it off well because then they continued a conversation with me in Dutch and I had to sheepishly say and shrug, "Sorry, English."  Conversation over.

And its weird being out in public-- Like I can't say "I'm sorry" to a stranger if I bump into them, or whatever. Or I can't say little things to keep up a conversation with a stranger.

The funny thing is, I guess because its a huge city, is its a lot like New York City in that its a big melting pot of languages. There is mostly Dutch, but also a lot of spanish, german and a wee bit of French. Most signs are first written in Dutch and then in English, which is nice of them. America doesn't exactly pride itself in having signs with Dutch translation at the bottom. Also, when looking at a Dutch phrase, with a little common sense it is easy to figure out quickly. I have already figured out the common words for "the, your, you, I, we, would, no smoking, open, again, etc." Also if you try and pronounce the Dutch phrase, sometimes it even sounds like the English way except a little different.  Languages are so much fun to play with! 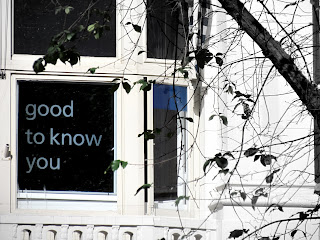 Also, all of their music here is the same as ours, and all in English. A lot of their signs and coffeeshops and clothing stores, are all written in English and only English. And when my friends and I were lost, every Dutch person we stopped to ask directions was able to communicate enough in English. Kudos to them! I think America needs to step up their game in terms of learning more languages. I know its in our school systems, but its not enough. Most of us are not fluent in Spanish, and that is our "second language". We need to step it up and be more universally acceptable. 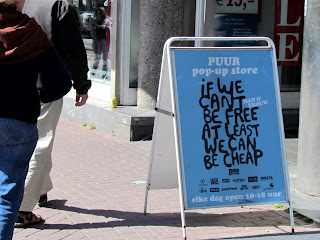 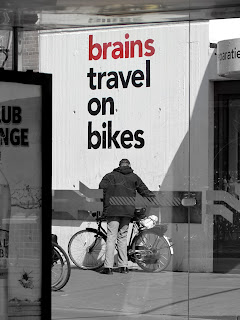 Anyway, Yesterday was fun! We started on a sightseeing tour which was funny because typical me is listening with one ear but taking pictures like crazy. But this is necessary, you see, because when the tour group stops to teach us something, I have to take pictures because taking pictures while walking has proven to be difficult.

After the sightseeing tour, we ended up at Anne Frank's House. This was really emotional and very saddening. Unfortunately cameras were strictly not allowed, so I don't have any. The entire tour going through was very quiet. It was startling to see the living conditions they were forced in to, and how it turned out anyway. It was very sad and hard to see, but also very eye-opening and interesting. For instance, I did not know that Anne wanted to be a writer. She wanted to publish her own book called the "Secret Annex". Besides her famous diary, she kept many other books with random favorite quotes, and creative writing scenes, novels and poetry which reminds me a lot of myself, which I really liked. 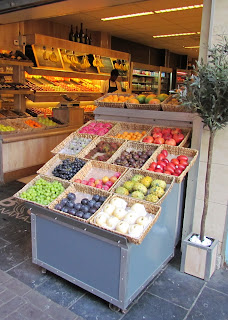 After that emotional toll, we all went to their supermarket here and grabbed some lunch ( I got a smoothie and an apple for 2.80 Euro! woot 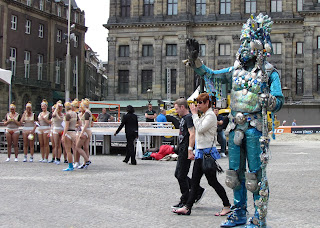 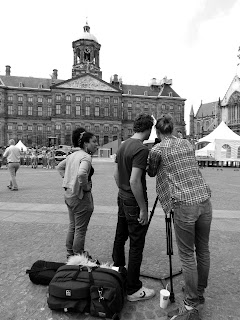 After my mini-alone excursion (one I will never forget!) We went on a relaxing boat tour through the canal, which was relaxing. Did I mention it was relaxing? We all so needed it. We took lots of pictures together and I took lots of pictures of....everything else.  After our cruise we had some free time til dinner, and this is where the bonding came in. About 6 of us decided to just walk around and explore. We came across a really cool flea market and I got some sweet pictures. We did some shopping, talking, and getting to know each other. By the end of the 2 hours, we all felt like best friends. It was unforgettable, and amazing, having that instant connection with five other people after just meeting them. 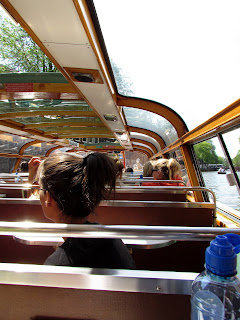 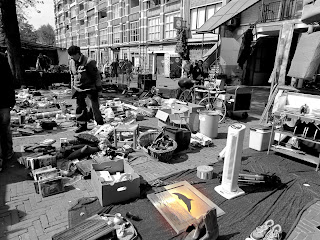 We then went to dinner, and it took us about halfway into our entree to figure out what nationality we chose. We thought we were in a Thai or Indian type food place, but turns it was totally Greek. very, very Greek. And I tried new things! And didn't die! Didnt even get nauseous! :D Although I honestly could not tell you WHAT I tried.

After dinner we went to this park where the famous " I amsterdam" sign is, and we all took pictures in while climbing in letters together. It was so much fun! 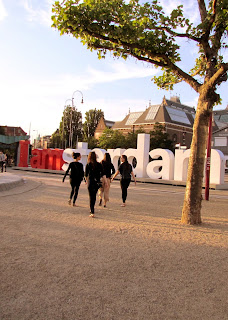 After that we went to the "Red Light District"....for those of you that do not know, prostitution is very legal in Amsterdam. The RLD is a place where prostitutes can openly sell their services to people seeking. It was the wildest thing I have ever seen, and certainly something I will never see in America! Women in bikini's wait in their house doorways behind a glass window, and tap at you as you walk by if they are interested in you. If you are interested in them first, you can go to them and discuss pricing for their services. Then you make a deal and...well, you know. So it was sad to see that women were relying on this for their income and being treated so lowly and this is what their life has come too...but at the same time I am glad it is legal because the country has so many practices in place to keep these women safe, STD free and free of lifelong detriments such as AIDS. Also, they are making a LOT of money.


Anyway, thats the majority of my day! Thanks for sticking around for a long blog! Hope I made it interesting! Today is a bike ride along the Dutch countryside, and I leave in ten minutes! We won't be done until later tonight. Tomorrow is an 8 hour bus ride to Munich!