Yes, that is a NICE Wing.

So this is probably actually going to be a short(er) post! Mainly because I slept about a half hour on the 7 hour flight and have been up all day since! So Its 9 pm here and that means its bedtime! But I will share a little about my day with you before that happens :-)

Its been amazing so far!

The plane ride was funny...when sitting in the terminal airport, two girls my age sat next to me. I was going to strike up a conversation but then realized they spoke Dutch. That's when It occured to me that they spoke Dutch in Amsterdam, and that they were probably just going home. Then two guys sat on my other side....and were also speaking Dutch. Then, suddenly, everyone around me was speaking Dutch! Is "speaking dutch" even the right way to say it? Probably not...someone please correct me if I am not culturally correct? I mean..."Speaking english" is right, right? right.

Anyway, It took forever for my seat mates to arrive on the plane and I kept envisioning who they would be. A cute guy, perhaps? Someone to teach me Dutch, maybe? A girl my age? Anyone? When alas, an elderly couple strolled their way down the aisle and I just knew they were headed for me. And, yes- you guessed it- they spoke Dutch. The guy across from me was watching a movie, In dutch. Everyone around me was reading Dutch newspapers. So, I felt it was best to just *not talk* and then no one would know I was a silly American. Then the flight attendant asked me a question in...Dutch....and I was just sort of like, "Umm?" So she repeated it in English. Then my lovely elderly seatmates were all like, "You're AMERICAN!!" But in a good way, they were overly excited. So in very broken english we shared a conversation about what I was going to do in Amsterdam, and what they were doing in America. It went a little something like this:

And it sort of just went back and forth like that. But it was funny because I could tell we were missing huge gaps in what one another was saying. And then I kept forgetting that she was trying really hard to speak my language and I knew none of hers. And then I kept talking really fast in English and was using slang words, so I had to start anunciating better and using gestures and simplify things. It was fun...

Anyway, lets fast forward twelve hours! So we are in Amsterdam now! This evening we had dinner and took an introductory walk around town and got to know the train system pretty well. They have this amazing overground train system running here and it is VERY energy efficient and so futuristic. It runs right along the street with other cars, bikers, pedestrians. Its Crazy! Its like this giant snake that just runs through town all the time.

Another key aspect of Amsterdam is the BIKES! (Jess you will agree with me here) but the bikes are EVERYWHERE!!!!! There are SO MANY bikes, everywhere you look. Guaranteed there are at least triple the amount of bikes than per cars here. Also, when you do see a car, its a smart car and very tiny. Whats funny about the bikes is the magnitude of the different types of riders...today I saw the following riding a bicycle: 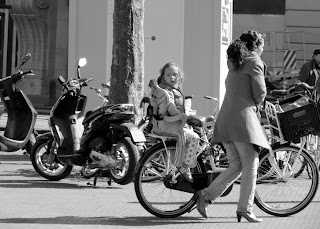 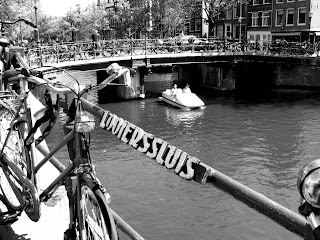 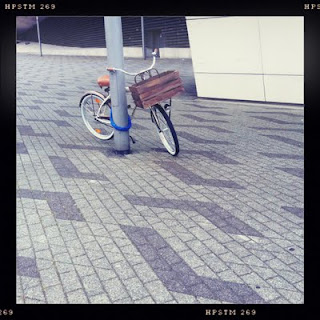 Its so cool! I am VERY envious. I would love to live in that kind of atmostphere where you can just bike anywhere you want to go all the time.

Also, they are all skinny here....can we think about why that might be? Hmmm.....

So thats my short(er) kind of post on Introduction to Amsterdam! Tomorrow is our sightseeing tour, a small cruise around the canal, and a welcome dinner.

my roommates and I found this ADORABLE treasure today- She found it in the hotel drawer, and it is a journal. What it is is that everyone that stays in the room is allowed to make an entry about what they did in Amsterdam, what they liked, what NOT to do, advice for others....and some people just draw really cool pictures! It was the neatest thing I have ever seen! I have never seen an American hotel do this and I don't even think they would let it happen! This is one of those things that is just *so* Europe! Ah! Love it!

OKay now to share some lovely pictures.... OK Just kidding they are having a hard time loading to my computer, but I promise to post them on here in a bit!! Goodnight world, and good after noon, America!

~A Writer in a Nurses Body

PS- The blog title is a reference to the fact that everytime I fly, I am always SO EXCITED to look out the window and everytime, without fail, I always have to sit on the wing. So today I was excited to finally look and then.........shabamm. Wicked huge poop wing for a huge poop plane. But it was a nice wing.
Posted by A Writer in a Nurse's Body at 3:32 PM

I love you. I laughed out loud several times. Have an amazing time!!! Your central european time, right?

Yes! I think??? I am 6 hours forward from home. Miss you all like crazy! Hope you like my blogs, I'm trying o make them interesting! Love you!