OH MY GOD. Please get comfortable in your seats because this WILL be a long post! I suggest you make some more popcorn. I am truly sorry if you used it all up on previous long posts! But here we go...

Yesterday! We woke  up really early (5 am- way too early for human being survival)- and trekked out to our bus like zombies. We had a 90 minute bus ride to the train station in Zurich, which took us to Paris! The train went really fast, but thats about all I can say about it besides the fact that It was uncomfortable and all the Parisians on it did not like us. It was hard to walk on the train, and when I went to the restaurant on board, someone laughed and called me a tourist (which, granted- I am, but still). I glared at him.

I wasn't exactly *thrilled* to be going to Paris and I saw it as something I had to survive on my way to LONDON! I have heard so many bad things about the Paris Reputation and their hatred for Americans, which is understandable, because Americans are annoying. Also, we are all tired and exhausted and not as ready-set-go for big cities, and Paris is a big city. Obviously. In case you like, lived under a rock or something, now you know.

Anyway, we arrived in Paris, still zombieish but not as much, and refreshed and set out on the town. We went on a miniature walking tour and got acquainted with the metro system (very similar to NYC but a little easier!) . After this we booked our hineys over to the cruise on the Siene River that travels around Paris. This was relaxing but not very picturesque (sp?). I think I maybe took 5 pictures in a time span of 45 minutes. My friend asked me, "Whats the matter? Why aren't you taking pictures?" And I told her that I see them with my eye first and I simply wasn't seeing anything. I don't want to take a picture of a pretty building just because its a pretty building. Instead, I zoomed in (a lot) and took a few pictures of people relaxing on the riverside. :-) 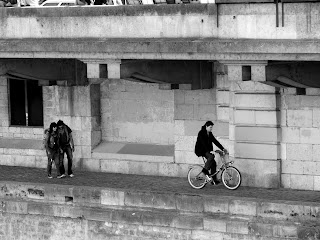 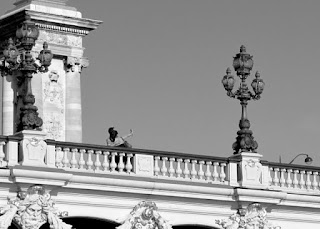 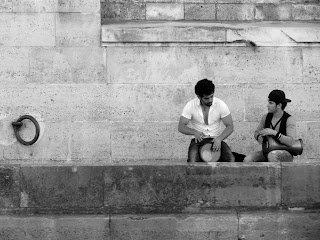 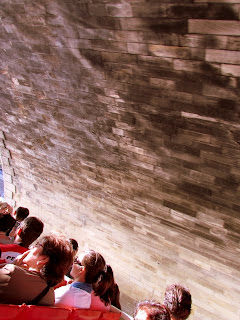 After that, we ran over to the Eiffel tower to make our reservations at 8 pm. I WAS SO EXCITED TO GO UP TO THE TOP!!! I thought the elevator was fascinating and this time I actually listened to some facts about the tower. As previously stated, I hate taking touristy pictures so I made a game with myself to pretend I was in a photography class, and my assignment was to take a picture(s) of the tower that no one else has ever taken before. It was challenging! The tower has been photographed for many many years now, and in many many ways. I think I got at least one or two unique ones and will share them asap! It was fun!

Also, we were just lucky enough to be able to see the sun set overtop the Paris skyline from the top of the Eiffel! If I had tried to have planned that, it wouldn't have worked! But we just got lucky! We got in line around 8:15 and by the time we made it to the third floor, it was only about a 30 minute wait til the sun set, around 9:50 pm. So of course I waited....I got about 400 pictures of the sun (minor exaggeration) and the pictures I am about to show you have not been enhanced by a computer, it is the actual sun! Just magnificent...kind of reminded me of the "Circle of Life" opening scene from the Lion King! 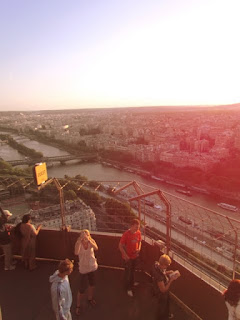 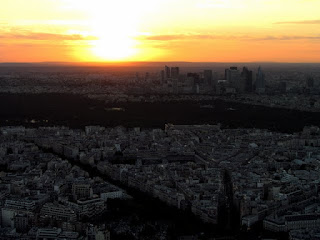 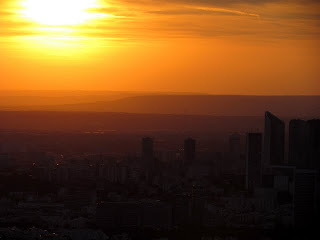 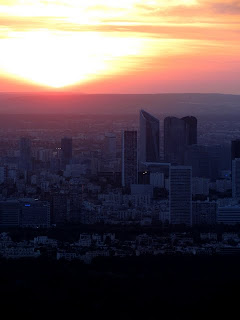 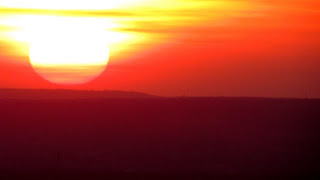 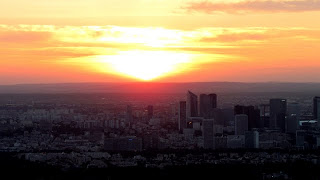 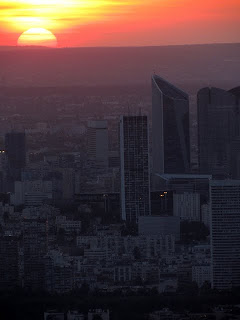 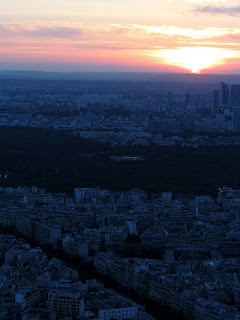 After the Eiffel, we all went out as a group to grab a drink or two, but I was a tired party zombie pooper and stayed out for just a little and caught a cab home. This is actually very meaningful because I have never flagged down a cab (not even in NY) and so this was a challenge at 12 am. It took me awhile to figure out how to flag one down, then some helpful Frenchian? told me to go to other side of street, where lots of them were waiting. I asked first one for ride and he pointed me to next one, as did the next three. I was confused and frustrated, but finally got a driver! So, that was the end of that night. I know, exciting. Be jealous.

Today, was my birthday!!! And it was AMAZING! I met up with a really good old friend back from NJ. I used to work with her about 4-5 years ago and we always had a good time. She is an au pair now in Paris, and has been living here for almost a year! So it just so happened that the day I visit she was free! Well, after going on a miniature bus tour (lame), I split off from my tour group and WALKED from the Eiffel Tower to where she was. Now, on the map, this looked really close. Also, by bus, I was tracing it with my finger and it went very fast. However, my feet and legs are tiny and I didnt realize how long of a walk it actually was. I budgeted myself 30 minutes based on the map, and it took......90 minutes. Walking very quickly. Oy!


But it was worth it! We met up in the Luxembourg gardens, and I assure you--this was heaven. Oh my GOD! It was literally like walking into......a dream? Like the whole world just fell away and this was heaven, on a cloud. It was perfect. It was perfect weather and so many people were out on the gardens...It was just incredible. 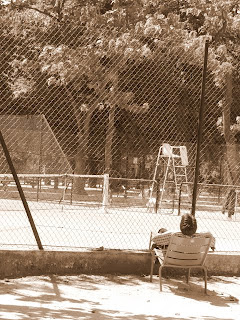 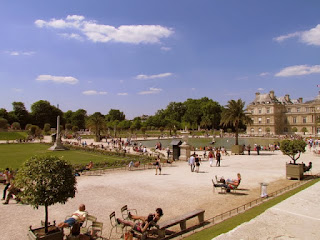 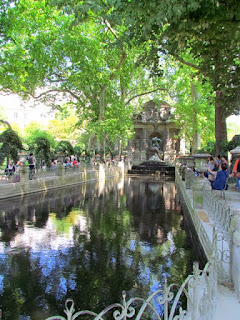 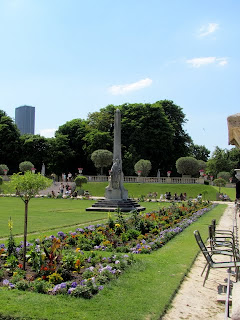 We walked around the gardens for awhile, before she took me to a secret (and also amazing) little cafe which had amazing (how many times can i say amazing!??) French baguettes, and a little raspberry tart. SO GOOD. Yay for Finally trying something new! (Raspberry tart). We sat outside for a long while and just caught up with one another, before her friend joined us and we instantly clicked together, it was perfect! So all three of us spent the rest of the day together walking all over Paris! They steered me away from Touristy-paris and showed me real-Paris...the daily life Paris. IT was fantastic. Also, they got me to try this french dessert- "Macaroons" (Sp?) which were SO GOOD. I can't really describe them.....it was kind of like a flavoured squishy oreo? Yay for another new food!

After that we spent time by the river side, just chatting some more and watching boats go by. We ended our day with what I considered one of the best birthday presents of my life....My friend took the time to think of something I might like to do while in Paris, and due to my obvious obsession with Barnes and Noble, books and writing, she took me to the most PERFECT bookshop!! Its this little tiny bookshop called "Shakespeare & Company" That I never would have found if I were a tourist. All the books (well, most) were in English, and I bought three! Also, I got them stamped from the company. The books were all randomly placed and mismatched, and upstairs they had ancient books from centuries ago. They also had an adorable reading room, with antique couches with books everywhere, comfy places to sit on the floor, so many adorable things all at once. It was just the most amazing thing I have ever been too. Thank you RK!


After that we sort of just said our goodbyes and I set off for my journey home, but wasn't exactly ready to retire for the day. So I stopped by the Louvre on my way home (hotel) and relaxed, took a couple pictures....it was just so relaxing! I love Paris. 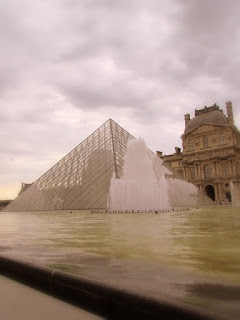 After that, I ventured to WALK home (about 3 miles) instead of taking the subway/metro. I had a metro ticket in my pocket but was stupidly determined to make it home by walking, so I could see more of Paris. I almost gave up at least 6 times, because my feet were tired, but the little angels on my shoulders told me to keep going, and I did......I made it all the way to where I thought my hotel was based on the address I have, but it turns out that wasn't the street at all. I was tired, grumpy and my feet really hurt at this point, and I could NOT figure anything out. I went to the address I had, and it was not there nor did I recognize anything. I looked for a couple people that looked like they spoke English, and got a 20 something year old couple that couldnt help at all. They pointed me right to the same place I already tried.

Ready to give up and crawl in a hole and die, I stood in one spot for a couple minutes, took a few deep breaths, and collected my thoughts and turned my thinking switch on. With all that thinking going on, I decided to flag down another taxi since I was such a pro at that now. I got one after about 15 minutes, but even the taxi driver was confused, and obviously there was a language barrier. But with her handy dandy map, and my sorrow face, we finally found it. I nearly kissed my hotel room floor!

AND THAT WAS MY BIRTHDAY!!!

THank you so much for reading if you made it to this point! Tomorrow, we take the Eurostar to LONDON!!! AHHHH MONKEEEEEEEEEES! So. Excited. :D

Paris and I are totally friends again. I am sorry we ever had a misunderstanding! Thank you Paris for a wonderful birthday!