A Step into my Life

I actually have about 4 blogs floating around in my head, but I will surely space them out. This blog was not on the waiting list, but just popped into my head...

As I grow up a little, my room changes slowly. During high school and just a bit after, about 5 years ago, my room was full of imagination, creativity....at my community college writing course, I was in full fledge writing mode. I was unstoppable. Writing thoughts raced through my head constantly. I HAD to carry a notepad in a car with me because in the matter of a fifteen minute drive, a million thoughts would race through my head, plots, characters, key pieces of information that I needed for my novels.....so I wrote them all down, and then typed them up and made about 5 sheets of just thoughts that came into my head, and when I typed them I also added a few quotes that I came across that I loved. So, I hung all these papers up by my bed (at the time) so I could re-read them as time went by. As time did go by, that space became further occupied with my photography, my artwork, my actual writing (poems, short stories, etc), things I cut out of newspapers, pictures from other people....quotes....and it was all placed on my wall in this giant collage.

Well, throughout the past five years I have added things, here and there. But nothing significant to the wall. Most of it was done in the span of about two years. Well now I have so many big things to hang (paintings, frames of photography, etc.) and need WALL SPACE. Also, when I move out soon, this room is no longer mine and the wall has to go. So, I think its time for the wall to slowly come down, little by little. So I took a little bit of it down today, and will share it with you. I want to share it with you because if I tuck the pieces away in a drawer, they die. If they can be read by all of you, then they aren't dead, they're in your minds....now, tomorrow, next year, in ten years....gotta love the internet.


So from here on is all artifacts from the wall, I'll mix it up with the "Sheet work" to the pictures....If I don't say who its by, then its written by me.


"She said goodbye to him, they both knew for the last time. She was heartbroken. It was a long hallway, she thought, as she turned away from him and began her journey down it, refusing to look back at him. By the time she had gotten to the end, she was fully transformed, someone who had completely molded herself so she didnt have to be that person anymore. She had the ability to fully walk into someone else's life and pretend for awhile, mold herself enough so that she could escape, even if just for a little while."
-I'm pretty sure this was from one of Jodi Piccoult's books, but I typed it into google and can't find it coming up anywhere, so many not. I remember reading this and thinking, wow, thats me. I've been there. I've been on that same hallway.....So maybe i did write it. It sounds like my writing style. So, can't say if I wrote this or not. It might be Jodi.. 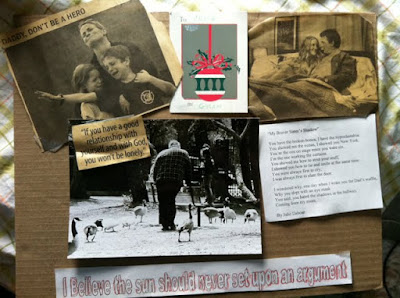 These are all artifacts from the wall.... Top left is from the newspaper, after 9/11. Next to it is a saved piece of card from my grandma at christmas. Next to that is a favorite still image from the movie, "Sex and the City". I have always been obsessed with Carrie and Big's relationship, because I had it. And I was always so happy when Carrie & Big ended up happy together...Bottom left is a quote from the newspaper article, "IF you have a good relationship with yourself and with God, you won't be lonely."  On the bottom of that is one of my photographs I have taken and fell in love with. It was taken in a park on Long island, on a Cold Easter Sunday. Next to that is a poem I wrote for my sister, back in my writng course. At the bottom is a quote line from one of my favorite songs, from Savage Garden. 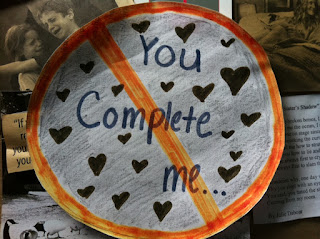 "Nice new piece of artwork....really? Did you have to?" said the man, sitting on the bottom edge of her bed, turned away from his girlfriend as he took off his work boots.
She Shrugged, "I don't know. I was really inspired by what we discussed in class today. Our professor made a really interesting point."
"Yeah, his point was that its not healthy to see yourself as part of a whole, that you can't stand alone without your lover by yourside, in your life.....but, "He paused, "...did you have to make it so obvious? So....blatant? Did you have to rush home and make a piece of artwork out of it?"
"Why are you bothered by it? It's a symbol of strength. We can both stand alone, if we had to."
"But do we have to? Why do we even have to think about it?" He said, as he laid back on the bed next to her. "Yes, I agree, " he continued, "I agreed with him today. We are not two parts of a whole. We are both 1 whole and together we make two. But does that mean I love you any less?"
"Nope...And I don't love you any less, thats my point. You don't complete me, but I still love you."
"Well maybe one day I want to be the person that completes someone. Is that so wrong? Is it so wrong if I wanted it to be you?"
^ I just wrote this to accompany the memory that went along with this piece of artwork I made.


"In the blink of an eye you might reinvent yourself. The person you were yesterday might not be the person you are tomorrow."-  Definitely Jodi Piccoult.

Just because a teacher says it, doesn't mean its true.
( I was peeved at a professor that day).

The woman dressed in a high class business suit, the standard black skirt and classy black top, sat in the hallway frantically looking through her purse, almost in tears. Business women weren't supposed to lose it, were they?
-writing down a character

Damn, she thought. Why the hell did she put the splenda's at the BOTTOM of her purse? And why did she think it wise to put the used ones back in her purse? This was useless, she thought, as she flung old splenda packets over her shoulder, sitting in the middle of her kitchen floor.
- writing another similar (or the same) character

The young woman rocked back and forth in her chair, not even noticing it, as she sat, waiting nervously.

The funny way I eat musketeers....use that one day for a character.

"He was already there. She knew by the way the air had taken a charge around her body, an electric field."
-Jodi Piccoult. I know that feeling....

freshman year, homeroom....every day, him coming to see me even when he wasn't supposed to. Mrs. DeSmith laughing, marveling at how great he was. The two of us, holding hands, whispering secrets that we were too young to even know to each other.
-a memory.

"Dreams- The kind where you wake up and your heart is as flat as a dime." - Jodi Piccoult.... I've had those. What hurts the most, was being so close, and having so much to say, and watching you walk away.....-Rascal Flatts.

Don't ever, ever, ever let yourself watch a girl prep herself for the day. If you do, you'll find that we are not all that we let show. A lot of us are fake,when we are  behind our colorful shadows. If you see a girl put on her make up, the secret is lost. You will be disappointed.

Have a car crash scene in a novel with a character because she can't see. Its such a nice day, and the sun is blinding, the music is blasting...what a good song.

A Writer's car crash-- make it an epic short story about a man so desperate to capture his thoughts that he crashes while writing and driving.........but it was worth it.

Cars merge, in a team. Cooperation, reading minds, communicating without words. Until a small glitch in the system and it all goes wrong.

Me, As a character? what would be my traits? Hiding....but in a way completely out in the open. Lost in music, lost in translation, lost in herself. Lost with words when I finally get the chance.

Thank you everyone, for taking a small step into my life...behind the scenes. :-) Now its completely open and known to the public that I am out of my mind! Alright, well, you already knew that, but still.

Wow Snaz! <2 I haven't seen the wall in person for a long time. It's grown. I would like to know about the strange way you eat Musketeers... ;)

Dearest, I can't thank you enough for your kind comments or describe to you the heart they gave me. I've barely put down my pen for three days - thank you so much for the faith you've put in me. You truly have a golden heart. blessings upon your sunshine face. xox

Diana, I am so very glad I was able to inspire you!!! THat is all a writer can ask for. Always remember to write for yourself and to always keep on writing!! Stay in touch! <3 Jules