To Have Said Goodbye

I'm not sure how to say this....life post-Europe has been great. I have been seeing so many friends, old friends, friends, new friends.......I have been with family around the clock, both nuclear and out-of-state family...and this has all been a pretty happy time. But thats the thing. It makes me undeniably nervous. Nauseous.


With the recent *unexpected* passing of my maternal grandmother, it woke me up. That was my first close relative that has passed away....although I am with and around death so much at work and in other parts of my life, I was never a survivor until now.

It woke me up. It made me realize that we truly do take so much for granted, even if we are good people and don't intend to...Sometimes I think we think we are immortal. We forget death happens to all of us. We forget that our loved ones could die any minute, we could face death ourselves tomorrow and not know it. Any of us.

We forget that. Because its morbid, and depressing....But then the unexpected happens and we are left with not even being able to say goodbye.

I went to spend a week with my paternal grandmother this past week. Its been a long-due visit....and it shouldnt have been. I should be seeing her all the time. And with my maternal grandmother passing, it has motivated me to just drive out to see her and just....spend time with her. She tells me all the time when I am with her that she feels "guilty" that she is not "entertaining" me, but she doesn't even know that all I want is to just be around her.

With this newfound anxiety and feeling like I could lose it all in a second, I have been acting weird. I am trying so much harder to mentally-record special moments with loved ones I am afraid of losing....and when I can't rely on mental, I have been taking pictures with her too. Just savoring moments, taking it all in in case I have to remember it all tomorrow. Its eerie. I don't like being like this....but is it necessary, sometimes?

Everything happens for a reason. I firmly believe and know that. As unfortunate as it was, my grandmothers death happened for a reason....but what reason?

I guess we aren't always meant to know for what reason, but a reason there is. We just have to have faith.


I said earlier in my blog after it had just happened, that it didn't feel real. That I still expected to see her when I travelled next to North Carolina. To talk to her on the phone, still. To see a comment on one of my pictures on facebook from her. That her death was just a hiccup in her health and it was a quick hospital visit, but she's ok now. I'll see her. But thats not true, and Its starting to settle in now. For my mom and my aunt, they have both expressed it "settling in" when they call their house and their father will never more say, "Let me go get mom".

For me, it has hit in unexpected ways. The other day I browsed through my phone contacts and realized I had my grandmothers cell phone number saved. Did I ever even call it? Just to talk? Also, I was just viewing my blog followers and realized she registered as a blog follower, quite some time ago, so she could receive emails when I post. Its those little reminders that punch you in the stomach.

I feel extremely sad that she was so excited for me to be able to go to Europe...and she only got to see a few blogs. It kills me that she couldn't even have seen a single picture. If I had known, I would have made more of an effort to get pictures up for her to see.....but who ever knows? You can't live your life with the "If I had known...." racing through your negative thoughts. You didn't know. I didn't know. But I know now, and maybe the "reason" for it all is to make me stronger and to realize for the future how fragile life truly is, and to savor every breath, every moment. Say goodbye to people as if you won't see them again, tell them how much you love them. Every time you see them...


As a conclusion to this eerie post, I leave you with an eerie finding. A week or so I stumbled across one of my county college's literature book that I have been published several times in, back in the day. The following poem is a poem I wrote back in 2006, to express the heartbreak of loss. Losing someone close to you. How that feels. It just seemed fitting that I just happened to stumble across it again, now. Like I wrote it for the future almost.....

It's Learning
To say goodbye.
To look through this fine print,
And see, eye for eye, the impact that has hit.
To say goodbye,
Is learning
That this is the hardest part of dying.
It's not the pain that comes with it....
Not the physical pain.
It's the tearing.
The Ripping Away,
At an innocent heart.
Innocent?

It's an Anger,
masking an inevitable sadness.
A fear.
A Hope.
A dream.

It's pretending to be angry, so you don't have to;
Cry,
Let go.
An anger,
For leaving us here.
For giving up.
For seeing the light.
Without us.

For knowing that in the end, they chose death,
rather than pain.
They chose heaven.
They turned down life.
A change.
A chance?

Would it have been wrong to have asked you to stay?
Because of a need?
An inability to let go?
to say goodbye?
A fear?
Of being alone? 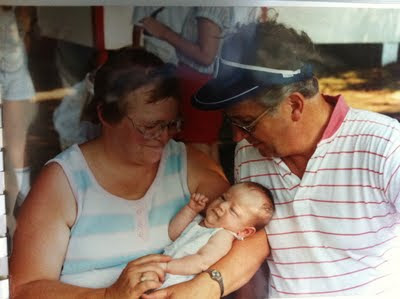 I love you Grandma. Miss you. Miss your smile.

~A Writer in a Nurse's Body